TLDR; one of the first state machine replication algorithms with an asynchronous system model that can tolerate Byzantine faults (although it has a weak synchrony assumption where all messages are guaranteed to be delivered after a certain time bound by using timeouts).

It can drive a consensus decision in two rounds of message exchanges.

It offers both liveness and safety under the 33% Impossibility Result and only uses public-key cryptography during faults to prevent major speed bottlenecks (typically just uses signed message digests). This circumvents the FLP Result because it relies on a synchrony assumption to guarantee liveness, not safety.

For a faster alternative, consider SBFT (which provides a reduction from $O(n^2)$ to $O(n)$ normal-case communication and a best-case latency of only a single round of communication)

The primary of a view is replica $p$ such that $p = v \mod |\mathcal{R}|$ where $\mathcal{R}$ is the set of replicas. Note that this explicitly allows for faulty primaries while the algorithm properly handles.

The algorithm works as follows 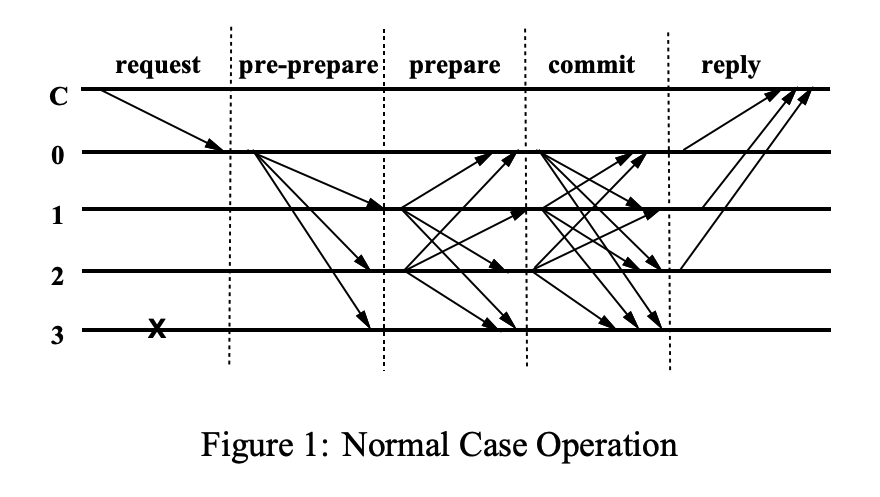 Replica 0 is the primary, replica 3 is faulty, and C is the client

As we assume only asynchronous model, we can’t assume any unresponsive node won’t rejoin at some later point. So either, we need to keep all log entries around potentially forever (not idea), or have some way to transfer state between nodes (which requires nodes to prove correctness of state).

Generate state correctness proofs are expensive so only happen once every 100 sequence numbers (a stable checkpoint).

Additionally, this checkpointing determines what the waterlevel $h$ and $H$ are

Similar to the concept of term changes and heartbeats in Raft

If the timer of replica $i$ expires in view $v$, it can broadcast a message to move the system to view $v + 1$